First off, thank you for considering contributing to Gryphon. The project can always use the support of anybody who’s willing to help.

Contributions can take many forms: you can share the project with other developers, report bugs (we can’t fix what we don’t know about!), ask for new features, improve the tutorials, contribute some code, etc. The project aims to provide an open and inclusive space for everybody, which is why it abides to the contributor covenant and has a code of conduct.

If at any point you need help using or contributing to Gryphon, or just want to contact the maintainers, feel free to send a message on Twitter or via email.

Reporting bugs and requesting features are very important parts of contributing to any open source project. Many times, a bug hasn’t been fixed yet simply because the maintainers do not know it exists. Similarly, a feature may not have been added because the maintainers do not know anyone wants it. Gryphon uses GitHub issues to keep track of both bugs and feature requests. Anyone is welcome to open new issues, so long as they are respectful and follow the code of conduct. If you open a new issue, be sure to tag it with the bug label if it’s a bug report, or enhancement if it’s a feature request.

New GitHub issues should be created only for suggesting and discussing ways to improve Gryphon; if you have questions about using Gryphon or need some technical support, try sending a message on Twitter or via email instead.

If you find a problem that you think shouldn’t be public (for instance, a security issue that someone might exploit if they knew it existed), please do not open an issue; instead, send an email directly to the maintainers.

This website is currently hosted using GitHub pages, so its texts and its code are open for anyone who wants to improve them. If you’d like to report a problem, try sending a message or opening an issue on GitHub.

If you’d like to improve things yourself, feel free to open a pull request - the website is in the gh-pages branch, and it’s made using Jekyll. If you don’t yet know what a pull request is, keep reading.

Contributions to the project’s website and its code are very much encouraged. Gryphon is a large program that takes a lot of work to maintain and improve, and help is always appreciated.

If you would like to contribute a pull request that isn’t yet related to an existing issue, start by creating an issue of your own. It’s a good way to talk about your proposed changes and get advice before you start doing the work, and may avoid your pull request being rejected if your changes don’t align with the project’s direction.

When interacting with the maintainers on GitHub, you can usually expect a response within a couple of days. If you haven’t heard anything after a week, feel free to ping the thread.

Gryphon currently uses the release branch as its (reasonably) stable branch. This what users will access when installing Gryphon for the first time. Day-to-day development is done on the development branch, which is also where pull requests should be made. The development branch is merged onto release regularly, on a sort-of-weekly basis, resulting in sort-of-weekly updates for the users. The gh-pages branch contains the code for this website. Any other branches are works-in-progress that will eventually merge into one of these three main branches.

If you want a quick start to the project, Gryphon supports using GitPod for development. GitPod is a platform that offers an online IDE and terminal that helps users contribute to open source projects. The GitPod build is based on the project’s Dockerfile, so any instructions for using Docker in the tutorials should also work in GitPod. You can access a GitPod workspace setup for using Gryphon with this link.

Setting up the environment on macOS

Gryphon is set up as a Swift package, so you can start looking at the code right away by creating an Xcode project:

Once the Xcode project is open, start by setting it to run in the current directory:

Next, set a few arguments to use with the Gryphon executable:

These arguments will make Gryphon translate the Test files/test.swift file. You can open it on Xcode and change it however you want to. When you run the project with ⌘+R, you’ll see the translation show up in Xcode’s console, along with other intermediate ASTs (if you added the extra -emit arguments).

Setting up the environment on Linux and Docker

Since Linux and Docker don’t have access to Xcode, the setup is pretty much the same for both. Start by cloning the repository if you haven’t done it yet, either directly or through a fork you own (if you don’t know what a fork is, read one of the tutorials on making a pull request, like this one or this one). Remember to use the development branch if you want to change code and the gh-pages branch if you want to change the website.

Gryphon is set up as a Swift package, so most commands can be called using the Swift package manager. To build the main executable, run:

Then execute it using:

A common invocation involves translating the test.swift file and printing its intermediate ASTs for debugging:

A usual development cycle can involve running unit tests often, then running the bootstrap and Xcode tests just before committing the changes. Acceptance and performance tests are rarely needed - only in the specific situations mentioned above.

The easiest way to run the test suite is with the test script:

This script sets up and runs the unit tests. You can add the -b flag if you want to include the bootstrapping tests, the -x flag for Xcode tests, and the -a flag for the acceptance tests:

The test script performs a lot of setup work, which can make testing a bit slower than it needs to be. It also doesn’t integrate with Xcode and lldb, which can be useful for debugging. Here’s how you can setup the environment to run the tests manually.

All automated tests require Gryphon to be initialized in the current folder. To do that, run:

Include the -xcode flag even on Linux and Docker to ensure all the necessary files are being generated.

Setting up unit tests on macOS:

Setting up unit tests on Linux and Docker:

If you are using macOS, you might also want to run the tests in a Docker container to make sure they work on Linux. To do that, follow the instructions on setting up the Docker container, then run any appropriate tests using the either the Scripts/runTests.sh script or the “on Linux and Docker” instructions in this page.

This project uses SwiftLint, a tool that automatically analyzes the code and sets it to the project’s style standards. SwiftLint can be installed using homebrew, or with other methods described in the project’s home page:

It can be used from the command line to automatically format all Swift source files according to the project’s standard. Just run this command from the root directory of the repository:

Alternatively, you can run this command automatically with Xcode by adding it as a new Run Script Phase.

This section gives a brief explanation on Gryphon’s architecture, in the hopes of making it easier for contributors to understand it and start making changes.

Gryphon is almost entirely implemented as a library, GryphonLib. The gryphon executable consists of a main.swift file that imports this library and redirects the command-line arguments to it, printing errors if there are any.

The entry point for GryphonLib is the Driver class. This class is responsible for parsing the arguments and calling other classes to do the actual compilation work.

The compilation is performed as a pipeline:

Each of these steps receives its input along with other relevant information, most of which is stored in a TranspilationContext. They mostly deal with ASTs, or Abstract Syntax Trees, a data structure that’s very useful for representing code.

Much of this process is done using files in the .gryphon folder. This folder is created whenever the user calls gryphon init <xcode project>. It is also created when calling gryphon <input files> directly, then deleted once the translation is done. It can be deleted manually with gryphon clean. This folder contains any auxiliary files that Gryphon might need. This includes the Swift templates used for translating references to the standard library, scripts for dealing with Xcode projects and for mapping Kotlin errors to Swift, and several others.

Most of the actual translation work happens in the several TranspilationPass classes. Each of these classes is responsible for performing a small part of the translation. There are many of them, as illustrated below, but they change often, so the image is probably already inaccurate. 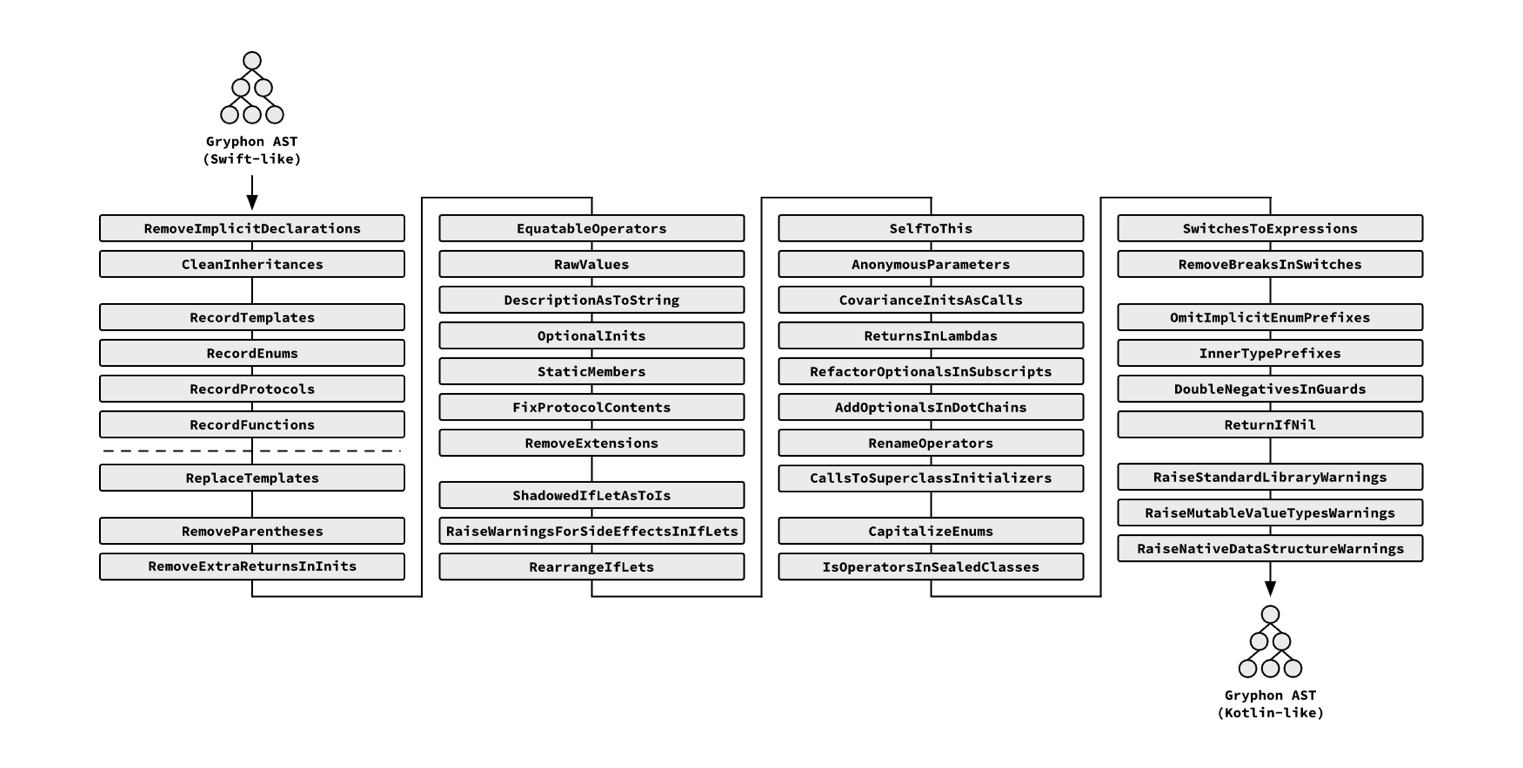 After all the transpilation passes have been executed, the resulting GryphonAST is handed to the KotlinTranslator class. This class turns the GryphonAST into a KotlinTranslationResult. A KotlinTranslationResult is a finished Kotlin translation - all the strings are there, in the order thay’ll be placed in the output file - but it still is structured as an AST. This allows the compiler to create error maps for each file before synthesizing the final code. Error maps are files that map each element in a Kotlin source file to the element in a Swift source file that originated it. Gryphon uses these maps to report Kotlin errors in their corresponding locations in the Swift source files.